Writing asynchronous I/O code in C is kind of tedious, and often leads to a callback hell. But it doesn’t have to be this way; if you have a main loop, it’s quite simple to use coroutines and write code in a soothing, old school, synchronous way. 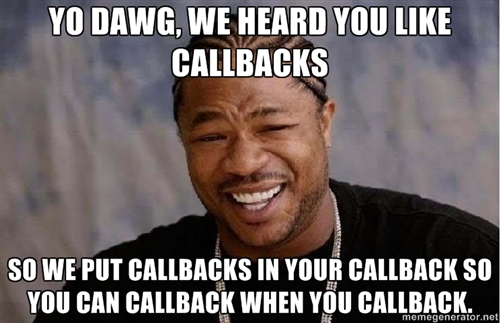 Under POSIX, it’s also quite easy to implement coroutines, via the use of the stuff contained in the ucontext.h header. Unfortunately deprecated in favor of threads, the functions and structures found in this header are one of the unpopular gems in the POSIX C library.

In lwan, there are n + 1 worker threads, where n is the number of logical CPUs. One thread is the acceptor thread, which accepts connections, and gives control to the other n threads, which in turn do all the work of receiving a request, parsing, and delivering the response.

Each of these worker threads can multiplex thousands of connections by polling on events: so, for each worker thread, only one request can be handled at a time. And, if one blocking operation (say, write to a socket) would block, all other requests would wait for a response.

By yielding the coroutine at the right moments, lwan blocks only on calls to epoll(4). Whenever the socket can be written again, that coroutine is resumed. The request handler function does not know what happened.

As said earlier, POSIX offers some infrastructure that can be used to implement coroutines or more powerful concepts, like call/cc. However, they’re quite tricky to use, so it’s often a good idea to offer a thin wrapper on top of them. The API used in lwan is the following (implementation details omitted for brevity):

To allocate one, just allocate space for sizeof(coro_t_) + stack_size, initialize the variables, and call getcontext(&coro->context). (These context-swapping functions are weirdly-named in my opinion: getcontext actually saves the current context into the variable pointed to by its sole parameter.)

After that, one just need to set up the context so that it points to the newly-allocated stack:

And then call makecontext() so that the coroutine entry point can be called when resuming the coroutine. (Another weirdly-named function. No wonder why this thing is quite unpopular.) This function takes a variable number of parameters, each one being a 32-bit integer value. I don’t know why a void * wasn’t used instead – so, on 64-bit, I use an union to break a pointer into two 32-bit components:

That’s it to allocate a coroutine.

Just free the coroutine’s coro_t structure. Lwan’s implementation does run the deferred statements at this moment.

Yielding from a coroutine

To yield from a coroutine, just save value into coro_t’s yield_value field, and make a call to swapcontext(), swapping the current coroutine stack with the context that was active when the coroutine was resumed (which happens to be the routine that resumes a coroutine – which now cleans up and return to whoever called it, most probably the main loop). value is now available to whoever called coro_resume() and is used in lwan to determine if a coroutine should be resumed.

From the user perspective, it’s just like calling some blocking function:

Behind the scenes, lwan_sendfile is actually doing this (error handling omitted for brevity):

(Of course, if available, sendfile(2) is used instead in a similar fashion, but this better illustrates the point.)

Whenever the coroutine yields, it goes back to the main loop, which is now free to resume another coroutine. Ideally, one could yield to be resumed on a certain condition (instead of assuming that the condition is just “the socket is ready to be written to”), but this isn’t possible in the current implementation.

For implementation simplicity, the same timer code that is used for keep- alive connections is used for coroutines, so that they don’t linger indefinitely.

There are other details that were ommitted from this post. Lwan’s source code is small enough it can digested easily, and if you’re not sleeping already, check it out.

Although not as performant as the traditional way of using callbacks (resuming and yielding from coroutines are a little bit more expensive than calling a function), coroutines brings a lot of simplicity when writing asynchronous code.

The example shown here might not be expressive, but imagine an application fetching data from a key-value store from another machine: there might be dozens of calls to the database to build a web page, which would be pretty difficult to handle if there were dozen callbacks. With a synchronous style, that would be a lot easier to write and maintain.

One could argue that the same thing could be done in threads. But creating more threads than there are processors will often hurt performance (for various reasons) in noticeable ways. Also, coroutines are cheaper on the memory requirements: in Lwan, they sport 16KiB of stack space and it takes a little bit more than a malloc() to set them up.

I believe we should stop using callbacks for asynchronous I/O and use things like this. Even if ucontext.h is deprecated from POSIX, the functions a fairly trivial to write (even in assembly language) – actually, encouraged, given that swapcontext() and getcontext() makes often unnecessary system calls.