I’ve attended this year’s FISL, both as a booth attendee (at ProFUSION’s booth, demonstrating a few of our end-user-visible projects), and as a speaker for my old FINF project.

FINF is a Forth-like programming environment that I’ve written in my first year at the college. It’s not the first compiler I wrote, but it was the first that was actually fun to write. Some years later, I’ve decided to rewrite it so that it would work on the Arduino – and that’s what I went to FISL to talk about. 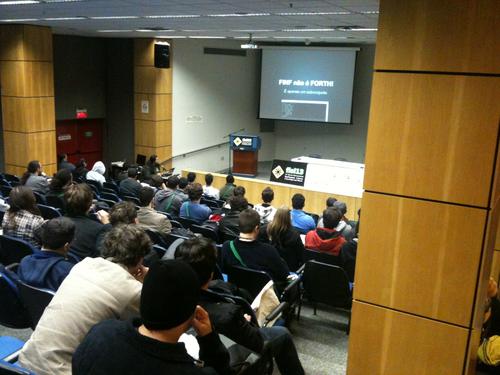 Arduinos are traditionally programmed by using its IDE, in a language that resembles C++. In fact, it is C++, but some of the (boring) details are hidden. But, being C++, it’s bound to the slow write-compile-upload-test procedures; there’s no interactive prompt, such as you have with Python or the venerable 8-bit Microsoft Basic. And since Arduino is all about experimentation, an interactive prompt is a must.

FINF is there to fill this gap. It is not a full FORTH implementation; only a small subset of it is there, but it’s enough to blink some LEDs, make some noise, and – if a video output shield is used – use the Arduino as an 8-bit computer! But, since user code actually runs on top of a very simple virtual machine due to the Harvard architecture used by the AVR microcontroller, it’s not possible to expand the interpreter without getting dirt in your hands. Add that to the quite messy code, mix it with myself not being a good marketer, and you have yet another failed open source project of mine! :)

In any case, the slides (in Portuguese) are available online. Unfortunately, the presentation was not recorded, so if you were not there, you’ve missed the great opportunity of seeing myself making a LED blink in front of an audience.

(By the way, I’ll be talking during EFL Developer Day in Barcelona early next month. If you’re there for LinuxCon/Embedded Linux Conference and would like to join me for some beers, don’t hesitate to contact me!)