When I wrote about lwan's templating engine on a blog post last year, I purposedly ommitted the fact that it didn't support sequences. Took me almost a year, but I've finally implemented it this week. (Lwan is usually a low priority weekend project. Maybe that should do as an excuse for my laziness.)

It took me three tries to get this right. Rube Goldberg machine kind of right, but there's always some elegance in ingenuity.

The first try would require one to create the list beforehand, and then pass it to the template engine to render. Not only cumbersome, but would require the creation of (potentially) large amounts of temporary objects.

The latter reason lead me to think of a way to implement iterators in C. This is usually done using callbacks; and although performant, it gets pretty verbose and tedious as there is usually the need to create structures to keep state, and different callbacks to initialize, destroy, and advance the iterator.

Lots of things happened since then, and this feature sort of creeped under the low priority rug for the most part of a year.

While writing a completely different program in Python, however, it struck me: I could use the coroutine stuff I was already using in lwan and implement generator functions. A few minutes later and I had a working prototype, which can probably be better explained with the help of a diagram: 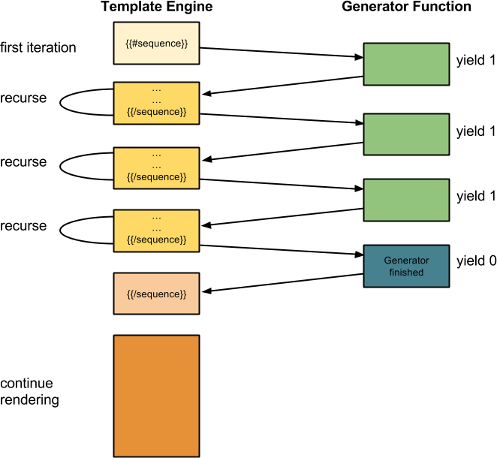 In short, the engine will create a coroutine whenever it finds a {{#sequence}} template tag. This coroutine will start, and will execute as usual until it yields.

Yielding false, the engine assumes the iteration ended, and proceeds to find the next matching {{/sequence}} tag to continue from there.

On a true yield, however, the engine will recurse to apply everything is between the iteration tags, repeating the process when the iteration-end tag is found and the coroutine yields true again.

The coroutine is supposed to clean up after itself before returning a false value. 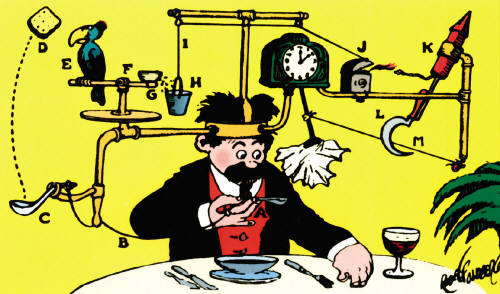 A sample generator function is shown below. It iterates over a directory with readdir(), returning 1 on new item availability and 0 when there isn't anything else to do. Notice that initialization, iteration, and cleanup is all contained within a single function.

Also, notice that there's no need to copy any values to and from the structure -- calling coro_yield() will of course maintain the stack alive, so local variables can be used outside this function as long as a reference to them can be obtained.

The details of how the variable descriptors are set up are explained in the commit message that introduced this change. (The commit itself is quite buggy, but whatever I could find has been fixed in HEAD already.)

In an ideal world, one would use something akin to Golang's Channels, but if I were to implement them in lwan it would take perhaps another year. Plus, they wouldn't be as efficient as setting some pointers. But they might be useful in the future, so I'm not completely discarding the idea. Although I've never written a single line of Go code, I'm reading a lot about it recently and it is sort of positively impacting the way I think about programming. But I digress.