My laptop is a 6-year old ThinkPad X220. Although it's almost falling apart from years of constant abuse, I don't see myself replacing it anytime soon: it's easy to repair, has a great keyboard, and is a very dependable machine.

And it's supported by Coreboot. Substituting the proprietary firmware with it is very trivial: I followed the instructions on this blog post and they worked out of the box. (I also went the extra mile and flashed the firmware after passing it through me_cleaner.) 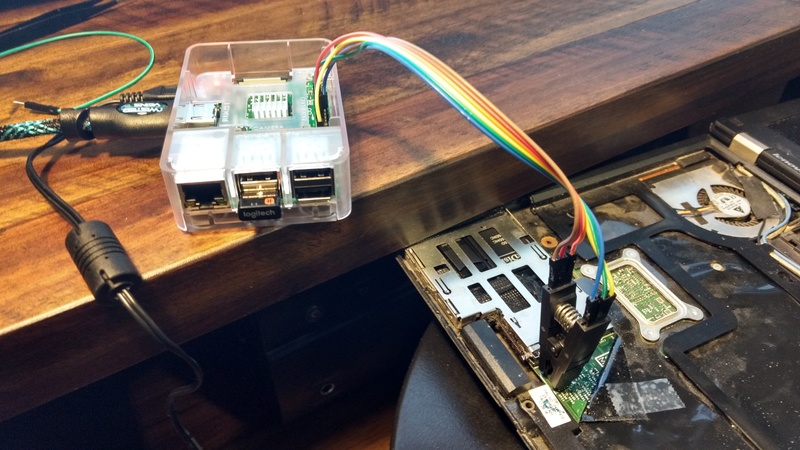 Flashing the serial flash using a Raspberry Pi 3. Yes, I need to clean up this computer.

The major difference from my previous setup is that my SSD had hardware-based full disk encryption. I ended up disabling this for two reasons: first, this isn't very secure (the key will remain in the disk RAM for as long as power is supplied); second, I was not sure if Coreboot supported this. So I disabled encryption prior to flashing the new firmware.

But keeping a hard drive unencrypted on a laptop isn't good practice. I decided to use LUKS instead.

However, instead of using SeaBIOS as the payload and have a standard bootloader, I opted to go through a slightly different route: have a custom-built Linux inside the ROM, open the /boot partition with LUKS, and kexec the current vmlinuz/initrd.

Compared to the usual setup of using SeaBIOS as a payload, this setup reduces boot time by cutting the middlemen. With the ability to boot from external devices removed, it's also arguably more secure. The in-ROM Linux has only the bare minimum: no network subsystem, only necessary filesystems, bare minimum drivers are built-in, USB is limited to HID devices, etc; the compressed kernel has ~1.7MiB with room to shrink. The in-ROM initrd is also quite minimal, containing just one file.

The only file is a hacked version of cryptsetup that acts as a primitive init, creating /proc, /dev (and mounting these two), and /boot, decrypting /boot, and performing kexec. It's statically linked with musl libc.

Flashing this requires opening the laptop, and I'm planning to do this next weekend when replacing the USB ports. However, the setup works very well under QEMU.

This blog post isn't meant as a tutorial -- feel free to contact me if you have questions or ideas on how to improve this. If you end up using something similar to this idea, I'd love to know as well.