One of the decisions I took early on while writing Lwan was to only support Linux, and think about portability later; this decision was influenced by the way the OpenBSD project approaches portability.

In retrospect, this was a good decision: this avoided many of the pitfalls associated in writing abstractions too early in the game. It also made the code cleaner: the abundance of C preprocessor usage, common in some portable code, hinders legibility and maintainability. Of course, this decision made it challenging to port it to other operating systems.

I was content with this decision -- until people began asking for BSD and Mac ports. With the exception of some system calls (e.g. epoll, or the Linux sendfile variant), porting shouldn't be surprising. Ideally, having the code largely #ifdef free would be ideal, so I had to find a way to make this happen.

While reading the GCC manual, I found out about an extension -- that also happens to be implemented by Clang -- that fit perfectly this scenario: wrapper headers. It's a C preprocessor extension that includes the next file in the include lookup path. With this extension, it's possible to write our own substitute header files, named after standard header files:

Have it in a directory named, say, "missing", and modify the header lookup path so it is looked up first by the compiler. This is easily accomplished in CMake by specifying an include directory with the BEFORE option:

(This just ensures that src/lib/missing will be passed before any other -I argument to the compiler, regardless of the order any other include_directories() macro is invoked. Your build system might differ, this is copied straight from Lwan's.) 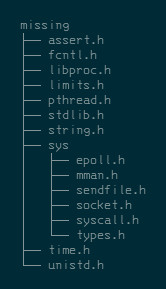 Then it's just the matter of implementing these functions in terms of other functions available in the system, and code using it will be none the wise: a #include <stdlib.h> line will include our wrapper header, which in turn will include the system's stdlib.h header; it then might define, in this example, additional prototypes, based on what the build system could determine during the configuration phase.

This way, most #ifdefs are hidden away in a single file, making it a lot easier to maintain and read the code. No application-specific abstraction layer with quirky semantics; just the familiar quirkiness from POSIX.

One of the things I'm particular proud of is the miniature epoll(7) implementation on top of kqueue (available in BSD systems). I considered moving Lwan to use an abstraction library (such as libevent or libuv) just for this, but was able to keep using its event-handling loop as is. Not only I understand 100% of it, it was a worthwhile learning experience. With ~120 lines of C code, this epoll implementation is easier to wrap my head around than the thousands of lines of code from those libraries.